Emotions Tense At “We Are Steubenville” Event In Eddy Theater 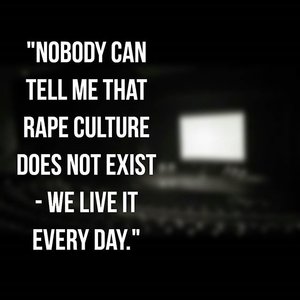 On October 6, “Steubenville,” a theatrical performance based on the 2012 rape case, was performed in Eddy Theatre. After opening remarks by Heather Black, Director of Student Affairs and Residence Life, who expressed her desire to create a culture of reporting, the lights dimmed and the audience was taken back in time. The performance started with Alex Spieth, the narrator, telling the audience about her on-stage persona’s younger-self’s desire to experience her first kiss, and then introduced the audience to another young girl.

“On August 11, a sixteen-year-old girl we’re going to call Jane Doe went to a party in Steubenville and got very drunk,” Spieth said. “She was raped by two players on the High School Football Team. Through various forms of social media many of the young people in the town knew about her rape before she did.”
While the event is sometimes called a play, it’s important to note that the performers in “Steubenville” are not reading from a script, but from trial transcripts. Through text messages from witnesses, clips from media coverage, messages from Jane Doe, and her attackers’ with transcripts of their own, viewers watched the story of America’s first live-tweeted rape-case.  Actors Jack Dentinger and Henry Ayres-Brown portrayed real-life witnesses, Anthony Craig and Mark Cole, while Chatham students Aubrey Shombert, a junior, and seniors Indigo Baloch and Maryann Fix portrayed the prosecutor and defense lawyers, respectively.
“I decided to be involved in ‘We Are Steubenville’ because I firmly believe what happened in Steubenville was not just about those men as individuals who committed a dehumanizing violent crime nor just about their personal wrongdoing,” Fix said. “It is also about the society and culture in which they, and we, live.”
New Zealand born Eleanor Bishop is the show’s creator. A third-generation feminist, she grew up with a passion for art and strong interest in gender politics and chose to merge those interests during her time as an MFA student at Carnegie Mellon University. What started out as her final project is now a theatrical piece that is being performed at a number of different universities.
It is not lost on Bishop that the individuals portrayed and discussed are all too real, which is why she and fellow writers only use information open to the public and refer to the young woman as “Jane Doe” or “redacted” whenever she is referenced.
In between the reading of the trial transcript, the audience was not only shown coverage of the trial, but interviews centered around feminism, female sexuality, and stories from Chatham students and non-students about moments of feeling objectified.
Because the event was meant to be participatory, in between the footage and the readings, a time came when these words were projected upon the screen:
“Chatham, what are you thinking? What are you feeling? What do you want to share with us right now?” This is some of what audience members shared via text message:
“Women are human too they have goals and a future too.”
“Why don’t boys and men get it?”
“All of there experiences are so relatable, and it shouldn’t be that way.”
“I wonder if this has happened at on campus before.”
“I was afraid that would be me so I didn’t report it.”
“I appreciate Chatham taking the time to do this kind of event.”
The content from the trial transcripts evoked strong emotions from audience members. Although they had plenty to say about the Steubenville Case itself, as the night went on the discussion turned to Chatham’s own culture and sexual violence.

“Chatham’s only doing this to cover their ass.”
“Admin doesn’t give a shit about victims.”
“Does Chatham actually care? I know of one case that they never really took care of. At all.”
“I’m also scared walking alone, even on campus.”
“Why is campus security lying about reports?”
As these quotes suggest, many students in attendance were frustrated with the way sexual violence has been handled by the administration. This frustration carried over into the post-discussion performance, moderated by Carnegie Mellon University Coordinator of Gender Programs and Sexual Violence Prevention Jess Klein.
“I think when it comes to rape culture on Chatham’s campus, there are two groups: the blissfully ignorant and the aware and frustrated,” said junior Jorjanna Smith, who is studying Education and Social Services Administration.
Another source of frustration for attendees was the lack of male presence at the performance. With the exception of four men, two of whom were performers, the audience was all female.
“I feel like there’s a really low representation of the guys here on campus,” senior Psychology major Mckenzie Haskins observed. “There are a lot of boys here who could really benefit from this.”
Because the individuals who sexually assaulted Jane Doe were football players, and with cases like Brock Turner’s in the media, the role of sports culture in relation to rape culture was brought up. Lydia Aceto, a first-year Sustainability major, shared her belief that football players are “glorified” and that with the glory can come “entitlement”. Exercise Science major Caitlin Woodson observed that athletes are “treated as products that needed to be protected” in cases such as Steubenville. One of the few men present did have something to say.
“Being an athlete here at Chatham, I don’t think a lot of people realize how strictly and incredibly watched we are, and I know female athletes are watched too, like on social media,” said sophomore Criminality major Madison Mlinac. “But we have everyone’s eyes on us coming into, like, a new school. I feel like we’re kind of picked on with people saying ‘oh well male athletes’ and their expectations about what we’re going to do.”
Klein responded by saying that she appreciated that, and went onto say that she as well as the audience knew that not all men and sports teams commit sexual assault. Another audience member raised her hand.
“I feel like this often turns into a weird thing where we end up comforting men about this, and I know ‘not all men;’ I have a shirt that says, ‘not all men,’ but all women are in danger—all women face this everyday,” sophomore Creative Writing major Alie Davis responded. “I never feel safe. I wasn’t taught to feel safe; I was taught to protect myself.”
Davis wasn’t alone in her feelings.
“I feel like the pressure you feel being an athlete is doesn’t equal the pressure of being a woman and living with the fear you’re going to get raped,” said senior Psychology major Ariyonia Henderson, adding, “I don’t know where this conversation is going because there needs to be more guys here, but there’s not, and I get it it’s a ‘special event,’ it wasn’t a requirement but you’re preaching to the choir, but this is what happens at Chatham. The people who need to hear this are not here.”
All three student performers feel that the “We Are Steubenville” event should have been mandatory for all first-year students, followed by in class discussions.
In response to the audience’s reactions, Heather Black, who is also a Title XI Deputy Coordinator, said that she was still processing, but went on to mention that a student advisory group to address sexual assault issues and provide the university with feedback was in the works.

When asked what she hoped attendees would get out of the event, Bishop said that what people get out of seeing “Steubenville” is up to them, explaining, “The show tries to present what happened in Steubenville in a simple, honest way, and make space for people to react, to be emotional, to sit with the difficult emotions, to be angry, to be sad, and then to think about their own lives and campus and how they may have experienced rape culture, and/or been complicit in it.”