Reflection on the Women’s March on Washington 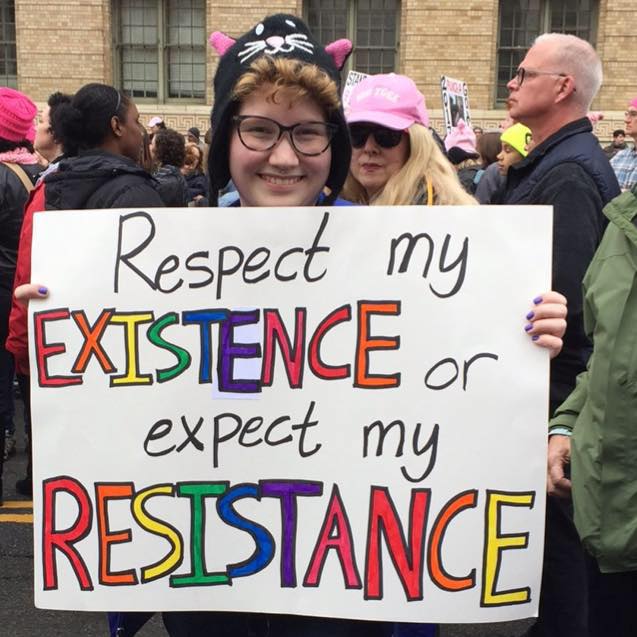 I didn’t know whether I would be able to go to the Women’s March on Washington until two days before, and to be honest I was a little scared.  My Facebook feed on Friday was filled with news of violence, tear gas, and arrests at the inauguration.  I didn’t know if the march would be the same.  I found out later that my dad had called my mom and told her he wished I wasn’t going; what if I got hurt or arrested?  My mom, a lifelong feminist, replied that she didn’t care, that this is something I needed to do regardless of the risks.  In the end, I decided that was what I thought too.

With more than a little apprehension, I got in the car with three other Chatham students at six the morning of the march.  We arrived in Arlington, Virginia just after ten.  Before we’d even gotten to the metro station, we ran into four or five groups of women in bright pink Pussy Hats.  None of us knew each other, but we all greeted each other like old friends.
Entering the metro station, all I could see was a sea of more pink hats.  Everyone’s excitement was growing, and even the long wait for the metro (which was delayed by the huge crowds of people using it) didn’t dampen the excitement.  Everyone laughed and took pictures of each other’s signs until my group finally found a metro car we could fit on.  I rode to the capital shoulder to shoulder with more feminists than I have ever seen in one place in my life, then stepped off the metro to more people than I have ever seen in one place in my life.
My group was too far back to catch a word of the speeches or even see them on any of the screens, but every now and again the crowd would echo a word or two back: “solidarity, solidarity, SOLIDARITY!,” “my body, my choice, MY BODY, MY CHOICE!”
More and more people kept pouring in.  A woman who took a spot next to me had a sign that read in gold Sharpie “None of this is normal,” and another woman’s sign read, “Will donate organs to RBG!”  One man was walking through the crowd with a flipbook of signs on a tall pole, changing his slogan every few minutes.
When the speeches ended and we started marching, we only made it a block or so before we had to stop; I learned later that so many people had arrived that we had filled the parade route from beginning to end with no room to move any further. I took the chance to look around at all the people who surrounded me, women, men, young, old, black, white, trans, cis, and everywhere in between, from the group of women in their 90’s standing on a corner and singing “We Shall Not Be Moved” to the middle-schooler with braces who had climbed a tree and was chanting “my body my choice” at the top of her lungs.  Seeing so many very different people gathered to support human rights reminded me that there are more good people than bad in the world, even if it doesn’t always feel like it.
There were as many reasons for marching as there were people at the march, but I marched that day  because I own a vagina and uterus, and Donald Trump thinks he can control what I do and don’t do with those (spoiler alert: he can’t).  I marched because everybody’s body belongs to them and only them, and it’s time the government was reminded of that.  I marched because we seem to have forgotten about the separation of church and state.  I marched because as a future doctor and as a future patient healthcare matters to me.  I marched because as a scientist I hate the spread of misinformation in our country.  I marched because as a citizen of Earth I have a duty to help reduce the harm we inflict upon our planet.

I marched because we somehow elected a president who brags about sexually assaulting women, who mocks people with disabilities, who is openly corrupt over the most qualified and composed candidate we have ever seen because that candidate was a woman.  I marched because I wanted to show Donald Trump and his supporters that we will never lie down and accept injustice just because he is our president.  In the words of Peggy Carter, “Compromise where you can. Where you can’t, don’t. Even if everyone is telling you that something wrong is something right. Even if the whole world is telling you to move, it is your duty to plant yourself like a tree, look them in the eye, and say ‘No, you move’.”