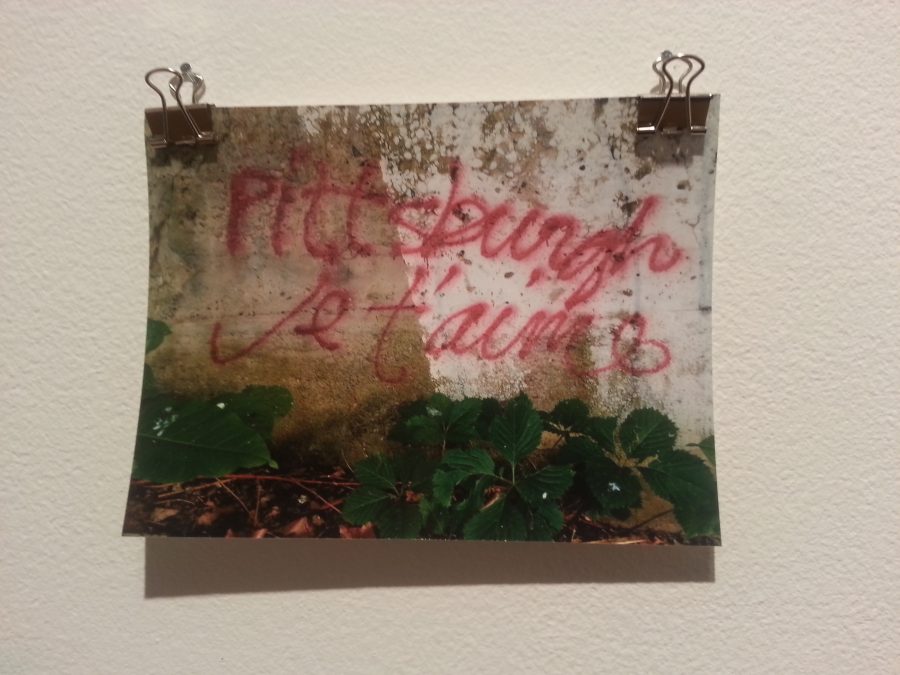 Common wisdom would have people believe that the creation of art is only for the elite: people with extensive training and pricey equipment at their disposal.  However English artist, Hilary Robinson, proves in her new exhibit, “Pittsburgh je t’aime”, that all one truly needs to make art is a smart phone and an eye for beauty.

Currently based out of Middlesex University in London, Robinson spent several years in Pittsburgh where she was the Dean of the College of Fine Arts at Carnegie Mellon University, as well as serving on the boards of several local art establishments.

Robinson’s exhibit, located at the Pittsburgh Filmmaker’s Galleries in Oakland, displays a collection of over 100 photographs, all of which were taken on her iPhone, and printed on a commercial printer.

The photos, which were taken in various Pittsburgh neighborhoods–specifically Lawrenceville, depict views of the city that are easy to miss if one doesn’t pay close attention.

They include images of graffiti, close-up shots of small discarded objects, interesting patterns in fences and doorways, cracked plaster on buildings, and contrasting compositions between natural and urban elements of the environment.  These still-life photos capture a certain raw beauty in the bustling urban environment to which Pittsburgh plays host; drawing attention to the simple intricacies that can so easily go unnoticed among the distractions of people’s everyday lives

As her artist statement explains, Robinson took many childhood visits to her great-uncle’s cottage, where she learned to pay attention to the small details of the world.  He knew the land inch by inch, and she would accompany him on walks around the fields where he worked as gamekeeper.  It was his devotion to the land, and the environment, that inspired Robinson’s keen eye, because he taught her “lessons about how to look, about the democracy of looking, and about the knowledge gained when you really see something.”

What Robinson does in this exhibit is present the viewer with a whole new way of seeing.  Her images capture the idea that beauty is everywhere, and that to see it one must move past simply seeing, and learn to truly observe his or her environment.  Her love of the city is clearly evident, and the images convey a sense of knowing a place intimately, and appreciating the fleeting beauty of such an environment.  As a result, each individual photo seems to capture, not a scene, but a moment in time.

The theme of her images is perpetuated in the gallery where they are displayed, and in the manner of their presentation.  The photos, taken on an iPhone and printed on photo paper, are attached to small metal binder clips, and hung on nails sticking out of the whitewashed walls of the gallery.  Likewise, the gallery itself has rather rough, industrial feel; reminiscence of Lawrenceville’s industrial past.  Nothing about the display draws attention to itself, but rather puts all of the emphasis on the photos in a way that they almost become an organic part of the environment of the gallery.

Robinson’s exhibit clearly displays a reverence for the world around her, and rather than letting her artistic expression be stifled by modern technology, she embraces it in a way that is unique to her style.  If viewers should take anything away from this show, it is that art is art is ubiquitous, and that art is accessible to everyone.

The Filmmaker’s Galleries is located at 477 Melwood Ave., and is open Monday through Friday.  “Pittsburgh je t’aime” will remain there through Feb 21, with a closing reception on Monday, February 17 at 5:30pm.