Exhibition to honor the Holocaust survivors that travels the world, found its way to Chatham University

An art installation entitled “Lest We Forget” is displayed outside numerous universities in Pittsburgh, including here at Chatham University.

The exhibit includes 63 large-scale images of Holocaust survivors, 16 of whom live in Pittsburgh. 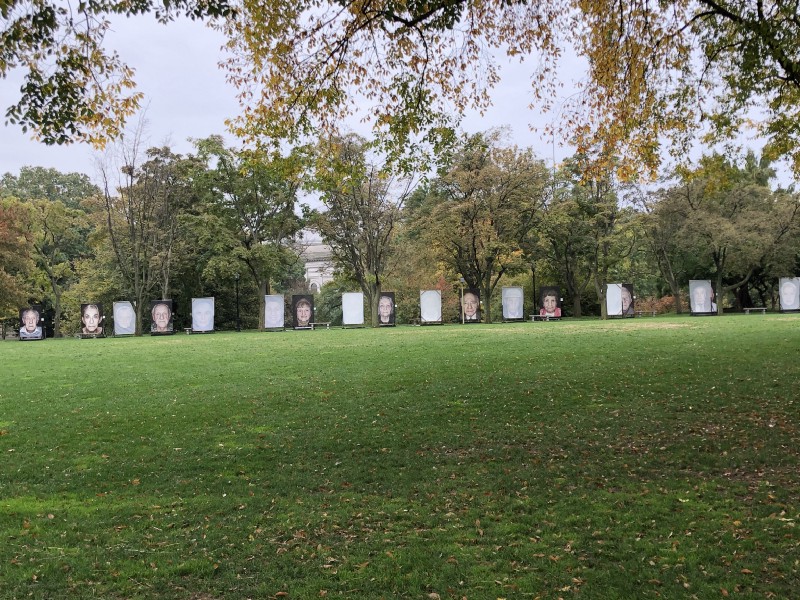 The installation was created by Luigi Toscano, a German-Italian artist.

“Hate and populism were on the rise . . . I saw my opportunity to take a stand by my means: photography,” Toscano said about his reasoning for creating this exhibit.

This exhibit came to Pittsburgh after Lauren Bairnsfather, the director of the Holocaust Center of Pittsburgh, reached out to the artist. Initially, Bairnsfather heard about the installation and was interested in hosting it in Pittsburgh. However, after the tragedy at Tree of Life synagogue, she knew that it absolutely had to be shown here.

The selection of portraits varies from city to city, but Toscano aims to always include images of local survivors in the exhibit.

The piece on Chatham’s Shadyside campus is located outside JKM Library and pictures Anastasija Tschernikowa, a survivor who finds it painful to talk about the Holocaust.

This installation was shown all around the world. It was first exhibited in Mannheim, Germany, Toscano’s hometown, in 2015. Since then, it has travelled around Europe and the United States.

“Everybody has access to this exhibition, independent from age, education, gender or whatever kind of background,” Toscano said as he explained the importance of the installation’s outdoor location.

The artwork encourages viewers to consider the atrocities from the past, particularly the Holocaust, and learn from them to ensure that history doesn’t repeat itself.

The goal of this installation “is to give history a face and, even more importantly, a voice to the survivors. They are the protagonists of this exhibit,” Toscano said. “It is easily forgotten that we still have people to tell this story but we have to face the reality — they are the last generation able to.”

One local survivor who is featured in the exhibit is Judah Samet. Originally from Hungary, Samet was in the Bergen-Belsen concentration camp. He was also at the Tree of Life synagogue on the morning of October 27, 2018.

Julia Gaetano, a Chatham student and a Bonner Leader intern at the Holocaust center, assisted in the organization of the installation. “It’s breathtaking to see the way they line the walkway,” Julia Gaetano said of the exhibit at The University of Pittsburgh. “It’s amazing how large and detailed they are. It makes it a sobering and confronting exhibit.”

Images along the walk way at University of Pittsburgh.

Zoe Levine, a Jewish student at Chatham University, attended the installation’s opening. “The more time that goes by since the Holocaust, the more people feel removed from it and don’t understand its impact. Having an exhibit with survivors that is on a college campus is a really good way to bring it to people’s reality,” she said.

In Pittsburgh, there are a total of 63 of these portraits around the city. 60 are at The University of Pittsburgh, two are at Carnegie Mellon University and one is here at Chatham University’s Shadyside campus.

The artist involved these three institutions to “include a sense of community” between the universities through the exhibit.

“You feel a connection [to the art] because this is your community,” Levine remarks about the images.

As a descriptive poster displayed at the installation reads, “the project is much more than just a look back to our past. By remembering, we raise awareness of hatred and bigotry in society today.”

The exhibit will be in Pittsburgh until November 15 and will then travel to Geneva, Switzerland.