The first 2020 presidential debate was a mess of diversions, interruptions. 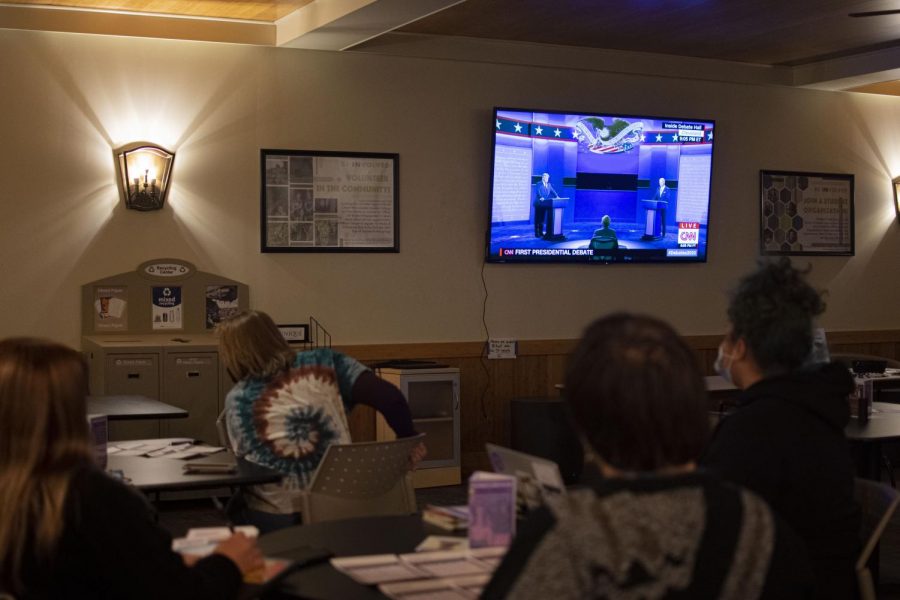 Tuesday Sept. 29 marked the first presidential debate between President Donald Trump and former Vice President Joe Biden. While debates have been an integral part of American politics, civility has been lost on the debate floor.

Held at Case Western Reserve University in Cleveland, Ohio, and moderated by Fox News anchor Chris Wallace, the debate aimed to cover six hot-button topics for 15 minutes each, ranging from the COVID-19 pandemic to police brutality. Both candidates were given two minutes of uninterrupted response time to a question, and the rest of the time was allotted to open debate between the candidates.

As many of my peers and I predicted, the debate went in every which way but this.

Even in the first segment, a diversion from the initial question occurred. When asked who should be given the right to elect a Supreme Court judge to fill the late Ruth Bader Ginsburg’s vacant seat, Trump remained on topic, answering that he was in office and it was his right to fill the courts during his term. Biden diverted this question to the jeopardization of the Affordable Care Act under the Trump administration. While Biden was the first diverter, plenty more ensued.

The most prominent diversion was Trump’s attempted deviation from the subject of white supremacy. When Wallace asked Trump if he condemned white supremacy, Trump ranted “I would say, almost everything I see is from the left-wing, not from the right wing.”

He only told the Proud Boys, a far-right group associated with white supremacy, to “stand back and stand by,” and once pressured by Biden to “say it, do it, say it.”

The reluctance by Trump to openly denounce white supremacy and half-heartedly denounce the Proud Boys blew up on Twitter Wednesday morning with the trending tag “YOU REFUSED.”

Perhaps one of the worst jabs was during Biden’s tribute to his late son Beau Biden.

Trump said, “I don’t know Beau. I know Hunter. Hunter got thrown out of the military. He was thrown out dishonorably discharged.”

While Hunter Biden was discharged for failing a drug test, there is no definitive proof the discharge was dishonorable.

Wallace intervened 31 times, 29 of which were directed toward Trump’s constant comments, even during Biden’s two minutes of uninterrupted speaking. Wallace valiantly attempted to keep the debate on track, but Trump wouldn’t be silenced, seen talking over Wallace on multiple occasions.

Merriam-Webster defines a debate as a regulated discussion of a proposition between two matched sides. The purpose of a debate in the presidential race is to give the candidates a chance to prove why they are better suited for office than their opponent, but that is the opposite of how this modern-day debate unfolded. Debates should be a civil back and forth between the participating parties, but instead the viewers witnessed mudslinging and interrupting.

Trump’s unprecedented amount of interruptions of both Biden and Wallace show his egotistical and unprofessional nature, while Biden’s clear annoyance with Trump’s bashes and subtle diversions from the questions make him seem unprofessional, although less so than Trump.

While one candidate clearly came off worse than the other, neither of them had a stellar performance. Wallace’s attempts to rein Trump in were futile, but Biden remained calm and collected, even directing his attention at the livestream audience a handful of times. Even when being berated by his co-debater, Biden didn’t seem much like the “sleepy Joe” Trump wanted us to believe.

Despite this, the presidential debate did not fulfill its true purpose — to persuade voters toward a single candidate. In our highly polarized society, most voters who will be participating in the election have had their minds made up since the primaries. This year, especially with the rise of mail-in votes due to the pandemic, many people are sending their votes in earlier and, therefore, have made a final decision on which candidate to vote for.

CBS News Poll posted a post-debate infographic showing that both Trump and Biden had similar percentages of people claiming that they won the debate. This shows that each candidate’s supporter bases are only reinforced by the debate performances.

Instead of lifting themselves up to prove they were right for the position, these two candidates were tearing each other down to make themselves look better in comparison. Civility was lost in Tuesday night’s presidential debates, so much so that CNN-TV host Jake Tapper promptly described the debate as a “hot mess inside a dumpster fire inside a train wreck.”

Despite what the candidates say about each other, inform yourself on the issues. Do thorough research and pick the candidate that reflects your values, and most importantly, use your right to vote.