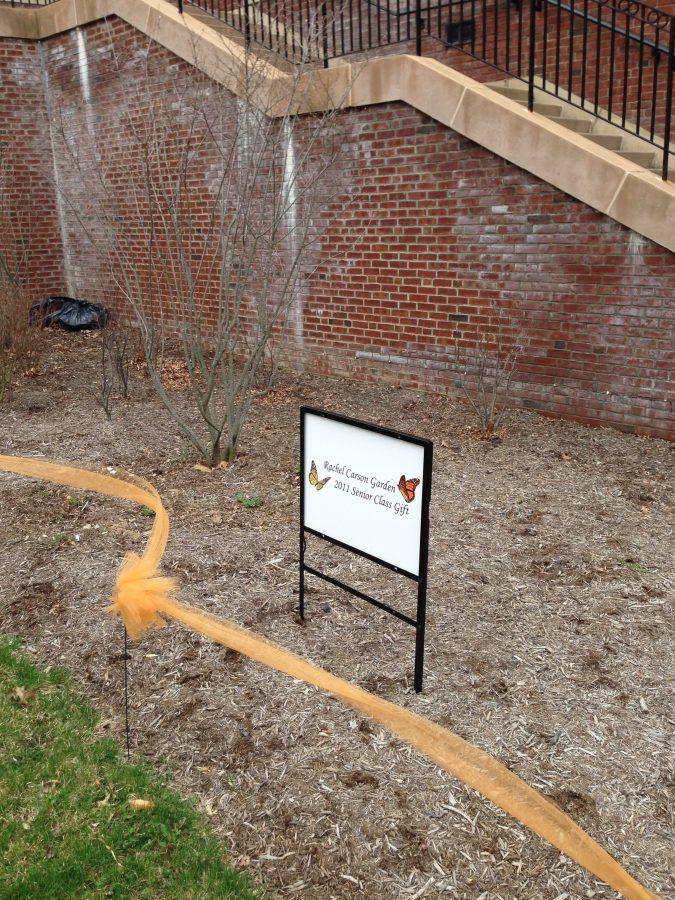 Students and faculty met in the Kresge Atrium in Buhl Hall of Science on Monday, April 14, to celebrate the life and work of biologist and conservationist Rachel Carson, a 1929 graduate of the Chatham College for Women’s previous incarnation, Pennsylvania College for Women.

The ceremony, held on the 50th anniversary of Carson’s death, included remarks from Chatham faculty members, a reading of an excerpt of Carson’s writings, and the dedication of the Rachel Carson Garden located just outside of the atrium’s ground floor entrance.  The garden was made possible by the Class of 2011’s Senior Gift.

Karol Dean, the Dean of Chatham College for Women, welcomed attendees to the celebration of Carson’s life, achievements, and time at Pennsylvania College for Women. She then introduced one of two guest speakers invited to provide context about Carson and her environmental work before the reading and the garden dedication: Mary Kostalos, Professor Emeritus at Chatham University.

Kostalos was the founding Director of the Rachel Carson Institute at Chatham, which was created to honor Carson’s life and work by perpetuating her goal of sustainability.

The Institute began very small, “as a file drawer in my office,” said Kostalos, but it grew to participate in some of Pittsburgh’s most prominent environmental events.

Members of the Rachel Carson Institute helped to organize the Earth Day 1990 celebration in Point State Park, which attracted over 10,000 people. Kostalos brought an official T-shirt from the event to show the audience.

The Rachel Carson Institute also annually held Eco Fest, a conference that included an essay contest, activities, and guest speakers. Kostalos also had a T-shirt from one of the largest Eco Fests to show the crowd.

According to its page on Chatham’s website, the Rachel Carson Institute is now a part of the Falk School of Sustainability and “will continue its focus on promoting Rachel Carson’s legacy – sustaining Earth’s life support system – clean air, pure water, fertile soil, and biodiversity – through research, education and outreach.”

Next, Patricia M. DeMarco, the current director of the Rachel Carson Institute, came to the podium to discuss Rachel Carson’s life and work.

Carson was the second woman ever to be hired by the U.S. Bureau of Fisheries as a full-time, professional marine biologist. She spent 11 years in this position, which gave her enough insight to write about the relationship between the ocean and its shore.

“If you go to the beach and don’t take a copy of ‘The Edge of the Sea’ [written by Carson and published in 1955], you’ll miss half of what is in front of you,” DeMarco said.

DeMarco praised Carson for asking “uncomfortable questions” about humans’ negative effects on the environment, which have inspired generations after her to ask similar questions.

In her book “Silent Spring”, Carson warns people against the use of the pesticide DDT (dichlorodiphenyltrichloroethane) that has further reaching effects on ecology and humans than the pest control for which it was intended. Carson also encourages people to take responsibility for their actions when it comes to the environment.

DeMarco reminded the audience that this book remains pertinent to this day, as companies use hydraulic fracturing, or fracking, to extract natural gas from the earth without fully understanding the process’s effects on the environment.

According to DeMarco, “Silent Spring” offered a “jolt to public consciousness” about the importance of caring for the environment.

DeMarco believes, however, that while conservationists understand what they oppose (like fracking, mountaintop removal, and burning coal), the tenets that environmentalists stand for (like clean air and fresh water) are too vague.

“We must look for ways not to merely protest; we must come up with concrete solutions,” DeMarco said.

Some concrete solutions DeMarco suggests are protecting biodiversity and practicing green chemistry (which minimizes the use and creation of hazardous substances), among others.

After DeMarco’s speech, senior Biology major Ashley Fersch read an excerpt from “Lost Woods: The Discovered Writing of Rachel Carson”.  Fersch is a member of Mortar Board, the honor society that has agreed to care for the Rachel Carson Garden.

Fersch read a letter from Carson to her friend Dorothy Freeman to acknowledged her coming death and comfort her friend.  Carson died at age 56 of cancer and heart disease in 1964.

Following Fersch’s reading, guests were asked to move from the atrium to the Rachel Carson Garden for the dedication.

Assistant Director of Annual Giving Dana DePasquale thanked the Class of 2011 for their Senior Gift, which allowed for the creation of the garden.

“Today, we know none of this would exist without [the Class of 2011],” DePasquale said.

She then unveiled the sign, identifying the space as the “Rachel Carson Garden, 2011 Senior Class Gift.”

After the unveiling, attendees were invited to enjoy refreshments in the atrium or remain outside with biology professor Linda MK Johnson and plant seeds that would be raised in the greenhouse and eventually planted in the newly dedicated garden.

Guests were invited to plant common milkweed, black-eyed Susans, and Joe-Pye weed, all of which are native to the region and attract pollinating insects.

According to Johnson, the black-eyed Susans and Joe-Pye weed attract common pollinators, like bees. Milkweed attracts monarch butterflies, which are immune to the toxins it contains.

Finally, guests were invited to follow the origami pattern on the back of the programs distributed at the event and make a paper monarch butterfly resembling the ones that will, with time, visit the Rachel Carson Garden.