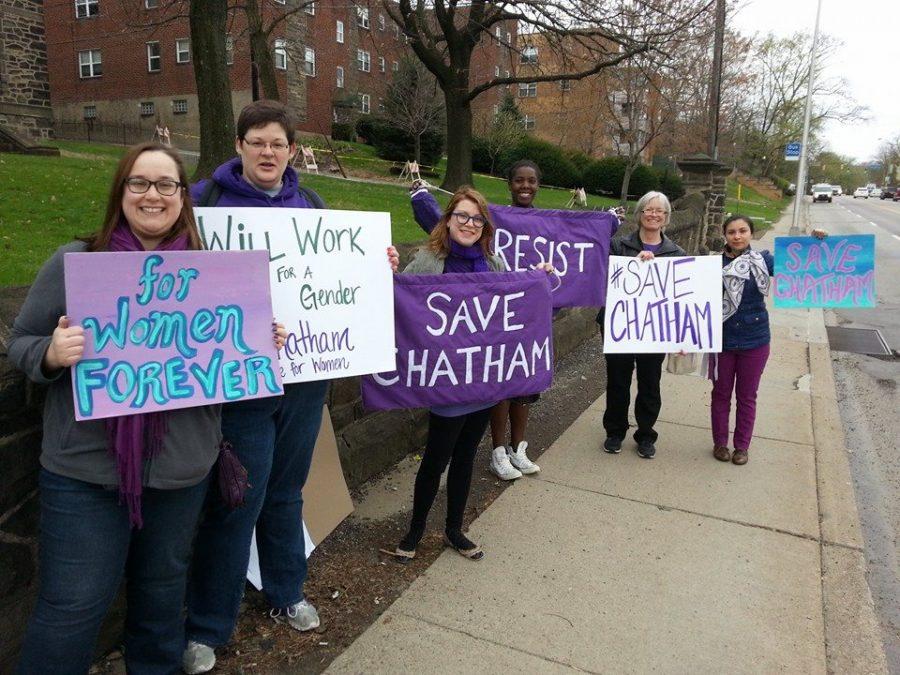 Photo Courtesy of Save Chatham

On the morning of Wednesday, April 23, Chatham alumnae and a few current students took to the intersection of 5th Avenue and Woodland Road to protest the vote that could turn Chatham College for Women into a coeducational undergraduate institution.

“Ideally, we’d like them to throw [the idea] away in the trash where it belongs,” said Sarah Ford, class of 2008.

“I don’t want students to be apathetic,” she said.  “There are other options other than going coed.”

The women wore the signature Chatham purple and held signs with phrases like, “Save Chatham for Women Forever,” “Rachel would weep,” and “Will work for single-gender Chatham College for Women.”  The women cheered when their messages raised supportive horn-honks from passing drivers.

For one protester who wished to remain nameless, said the protest is essentially about “being truthful.”

“I’m here because I feel like the administration hasn’t disclosed enough information or answered the questions that have been posed,” she said.

The protest began with about eight protesters on Woodland Road in front of the Mellon Building. According to Ashley Bittner, a junior in Chatham’s Environmental Science program, the protesters were just arriving when Chatham police arrived and asked the protesters to move before police were forced to arrest them.

According to Bittner, police said alumnae and students were not allowed to have protest signs on private property and that they were allowed to practice free speech, just not on Chatham’s campus.

According to Chatham Police Chief Donald Aubrecht, Pennsylvania Law states that picketers must be off the property of the institution against which they are protesting. As a former Homestead police officer, he thinks back to strikes by the workers of Homestead Steel, all of which had to occur off of Homestead Steel Works’ property.

“You don’t ever want to disrupt the operations of a business or the school,” he said.  “We always want to let [people] exercise their right to voice their opinion, but in an appropriate manner.”

Protesters were still going strong as of 11:30 am. They were even planning on staying long enough to have a candlelight vigil in support of Chatham’s single-sex education.

“I’m here because I love Chatham College for Women,” said Maureen Sampson, class of 2009.  “Single-sex education is not appropriate for everyone, but for some it changes lives, and I’m one of those women.”